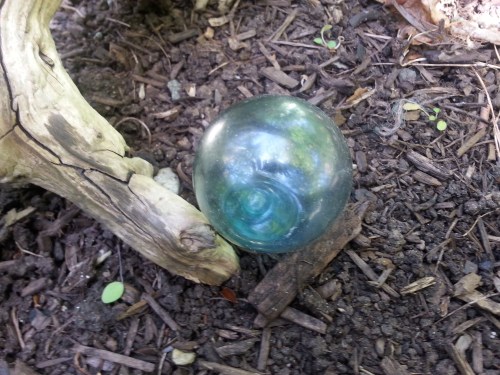 Growing up in the Pacific Northwest, I frequently visited the Pacific Ocean, usually with my grandmother and siblings. One of our favourite pastimes while on the beach was to search for “glass balls,” -fishing floats that made their way from Japan. They come in all shapes and sizes, and were translucent blue in colour. In all my years scouring the beach, I have never found one, although I’ve seen many in seaside trinket shops.

Fast forward to my early 20s. My boyfriend and I were on a camping trip to a place called Cape Alava, the northernmost tip of the “lower 48” United States, located in Washington State. It was my boyfriend’s first time to the Pacific Ocean. We arrived at our camping spot in the pitch dark during a driving rain storm. The morning dawned without a cloud in the sky. We headed through a short trail that led to the beach, and it was spectacular. There, sitting on a log, I shared the story of the glass ball hunt with my boyfriend. When I began describing what these glass balls look like, he reached down beside a piece of driftwood and said “You mean like this?” And there in his hand lay a little glass ball. I was speechless, and knew right away I had met my man. Thirty four years later, we’re still going strong.