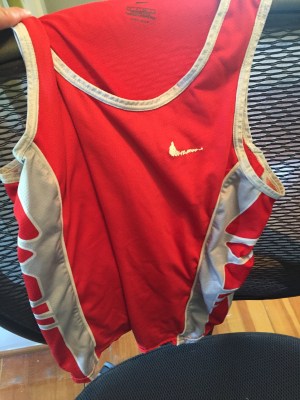 I wore this singlet to the 2004 US Women’s Olympic Marathon Trials. It was an adventure because I had only started running as an adult (6 years before the trials) and this was my first entrance into any sort of competitive race where I was qualified as an “elite.” I was really nervous going to the uniform check-in because I knew there were all kinds of stipulations on what you were allowed to wear and because I was surrounded by all the people I looked up to. I felt really out of
place and it was a big stage to get my first taste of national competition (I first tried to qualify for the Trials at the 2003 Philadelphia Marathon where I missed by 40 seconds).

I started running in St. Louis in 1998. I always assumed I would hate it again, so for years I ran on a treadmill so that I wouldn’t be out 5 miles from home when the hatred started. One spring day I headed out to the track at Washington University, where the 1904 Olympics were held. I did all my running there (up to 10 miles) for the same reason. Finally, they closed the track for repairs and I was forced into the world. The rest of that year, I ran loops around Forest Park. The 2004 Trials were held with 4 laps on the track and then a bunch of loops in Forest Park, pretty much exactly my running origins.